MY REDEEMER TO BE A SUCCESS AT STUD

DAVID and Rose Geall must have been pinching themselves all through 2017 and 2018 not just because of the exploits of their champion race bitch Up Hill Jill.

The daughter of Premier Fantasy and brood bitch goldmine Where’s Demonica (Where’s Pedro-Demonica by Bombastic Shiraz) cut through her opposition on the way to victories in the Group 1 Topgun and Easter Egg.

Along the way she picked up placings in the National Futurity, Sapphire Crown, Peter Mossman, Perth Cup, Paws of Thunder, Topgun and was a finalist in the Egg again and the Melbourne Cup.. all of them Group 1.

While that is all stuff of dreams, the reason David and Rose need to pinch themselves was because they were well aware that at home they had one just as good.

And when My Redeemer (Fernando Bale-Where’s Demonica) hit the racetrack the Gealls were back to the pinching stage all over again.

My Redeemer did not race as long as his illustrious older half sister, but in 51 starts he won 25 and earned $669,000 in stakes.

He did that from Group 1 wins in the Melbourne Cup and Harrison Dawson.

He was a finalist in the Australian Cup, Peter Mosman and Temlee all of them at Group 1 level.

Now My Redeemer goes to stud.

If he was a thoroughbred… some Hunter Valley (NSW) stud would have paid $40 million for him and he would be commanding a first season stud fee of around $60,000 or more.

That’s exactly how good he was on the racetrack and just what sort of stud potential he represents.

There is no faulting the dog, on pedigree, loos, size and performances.  He ticks every single box there is.

So, how does My Redeemer suit brood bitch owners and just what sort of lines will go to making him a successful stud dog.

The fact His mother has produced a champion in Up Hill Jill to the Irish champion race dog and sire Premier Fantasy means bitches with that great galloper in their pedigree are a MUST for My Redeemer.

That is a natural.

Premier Fantasy is everywhere in pedigrees in Aussie bitches.  And he is found in a number of stud dogs.  All these will suit mainting to My Redeemer.

Daughters of Kinloch Brae will also be especially suited to My Redeemer.

Kinloch Brae has sired multiple Group stars out of bitches with Where’s Pedro and Bombastic Shiraz in their pedigree.  This successful cross can confidently be attempted in reverse, the sire of his third dam.

All three are dominant in the pedigree of My Redeemer and lend themselves to plenty of line breeding.

My Redeemer’s own pedigree is fabulous in that Chloe Allen (dam of his sire Fernando Bale) is bred on the same Black Shiraz/Awesome Assassin cross as Demonica (second dam of My Redeemer).

This in-breeding to dominant lines will stand My Redeemer in good stead at stud.

But, My Redeemer also lends himself to matings to bitches where WHere’s Pedro’s little brother Hallucinate.

The most obvious of these is Barcia Bale who has Hallucinate as his damsire.

Anyone with a daughter of Barcia Bale MUST consider My Redeemer as a potential mate for their bitch.

The cross is fabulous.

The duplication of Awesome Assassin in the pedigree of My Redeemer also tosses up potential matings to bitches with Knocka Norris in their pedigree.

Fernando Bale sired champions Poke The Bear and Out of Range out of a daughter of Knocks Norris.  It brought a very powerful cross of Awesome Assassin and his sister Goddess of Fire.

Bitches with Knocka Norris, or his sister Elite Oriental, will be greatly suited to matings to My Redeemer.

I would also like to see bitches with more of the Floodgate family introduced to My Redeemer.  This wonderful race bitch and producer is back on his fourth line.

She can be picked up via El Gran Sensor, Pete’s Boss, Regal Brett and of course Paddy’s Flame.

My Redeemer goes to stud with every credential possible for success at stud.

He is a 31kg dog and history has show giants of the stud game do not need to be giants in size.  Quite the opposite.

My Redeemer came from a litter of six named offspring and all were winners Emerald Rainbow won 19 and earned $60,000 and was a multiple Group finalist.

The litter were all sound and genuine.  You cannot ask for much more.

Now is your chance to get My Redeemer straws for your bitch.  The current price per straw is $2,200 please click here to fill out the expression of interest form. 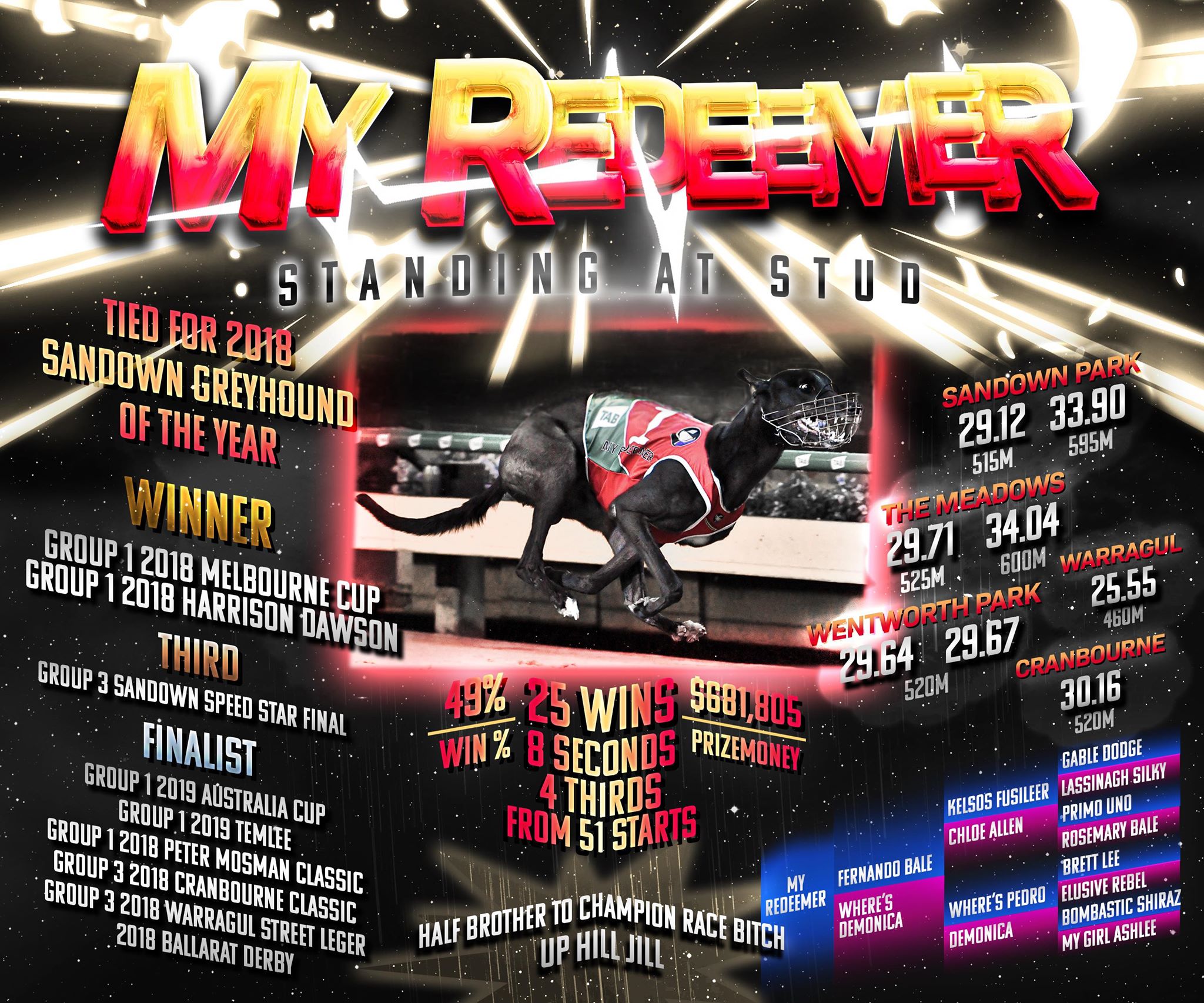 Tied for 2018 Sandown Greyhound of The Year